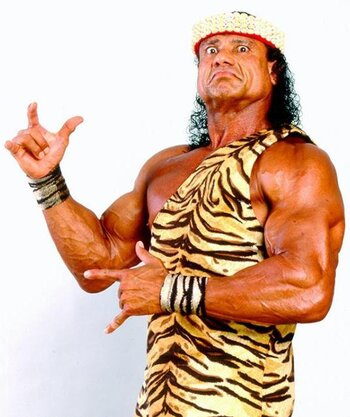 James William "Jimmy" Reiher (May 18, 1943 – January 15, 2017) was a Fijian professional wrestler and actor, better known by his ring name Jimmy "Superfly" Snuka. Originally from Fiji, Snuka wrestled for several promotions in the 1970s and 1980s. Snuka was the first NWA ECW Heavyweight Champion

and held the title on two occasions. He is best known for his time in the World Wrestling Federation (WWF) in the early to mid-1980s and is credited with introducing the high-flyer style of wrestling to the WWF. His children Jimmy Reiher, Jr. (Deuce of Deuce N Domino) and Sarona Reiher (Tamina Snuka) are also wrestlers. He has competed for WWE, ECW, various National Wrestling Alliance territories, the AWA, All Japan Pro Wrestling, New Japan Pro-Wrestling, AAA, FMW, Juggalo Championship Wrestling, and MANY, MANY independents and other promotions around the world.

He was inducted into the WWE Hall of Fame in 1996, but he was removed from it when legal troubles cropped up (See Unperson below). After the charges were dropped and he passed away, he was seemingly put back in, though his bio remains removed from the WWE's Website.

Not to be confused with Super Fly.

"Brudda, these are tropes associated with the Superfly, brudda!":