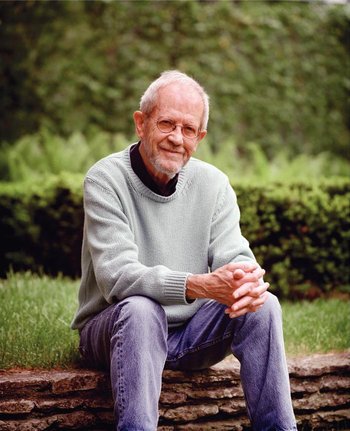 Try to leave out the part that readers tend to skip.
— Elmore Leonard's Rule #10 of writing
Advertisement:

Elmore John Leonard Jr. (October 11, 1925 – August 20, 2013) was an American novelist and screenwriter. He started as a writer of Westerns, but switched to whodunits and modern pulp fiction, where he got the most acclaim. Several of his novels have been adapted to screen, both big and small, and he also wrote a few screenplays. His career spanned six decades, and he continued working up until his death.

He's known as "The Dickens of Detroit" for his catchy, intimate descriptions of the people of that city (he lived in the Detroit suburbs). Author wannabes should definitely read up on him. His prose style and ear for dialogue are worth checking out for inspiration. Kingsley Amis once told him, "Your prose makes Raymond Chandler look clumsy."

. To sum up briefly: knock it off with the Purple Prose.

Sadly, he was struck down by stroke and died at his home in Detroit from complications of the stroke.

Some of his better-known works:

He also wrote some screenplays that were not based on one of his novels: