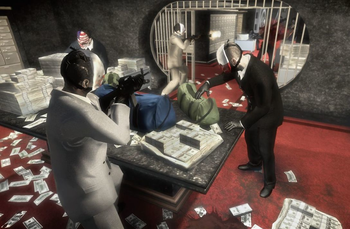 "There it is, neatly stacked. Well, you're robbers, ain't ya? Get robbing!"
"Because that's where the money is."
— Willie Sutton in response to "Why do people rob banks?" (attributed)
Advertisement:

Robbing a bank. This crime is about as old as banks themselves, but became a standard when banks evolved into large public buildings. Since criminals tend to want money, and banks usually have a lot of money, it's an obvious combination.

Bank jobs range from a simple stick-up by a lone operator who goes for whatever the bank teller has in the cash drawer, to elaborate capers to hit the main vault requiring months of planning and preparation carried out by a team of experts. The elaborate versions are often the focus of an entire movie. The FBI's definition of bank robbery requires the perpetrators to threaten bank employees into handing over the money, so technically most caper-type heists would be considered burglary. But don't expect anything involving theft from a bank to be called something other than "bank robbery" in fiction.

A Bank Robbery is often the victim of a Plethora of Mistakes, or it results in You Have Outlived Your Usefulness as the robbers decide to split the proceeds among considerably fewer people. If one or more of the robbers works for the bank, it's an Inside Job. If subtlety fails, or if the robber is a Leeroy Jenkins that gets into the bank shouting "Hands up, this is a robbery!", it can easily escalate into a Hostage Situation.

If the setting includes Superheroes or Supervillains, and part of the action takes place in a bank, rest assured that the bank will be robbed sooner or later. No matter how innocuous is the action done in relation to the bank (pay taxes, ask for a loan, have a casual talk in front of it), if the hero goes anywhere near a bank, a villain will try to rob it. It's almost the Murphy's Law of superheroes.

In Real Life, most bank robbers go for a much more Boring Yet Practical route called the "note job". Instead of a group of hardened criminals busting in with ski masks and threatening people with guns, or pulling off elaborate heists, a lone criminal will simply walk in with no disguise, hand the teller a note demanding a certain amount of money, then walk out with the loot. This happens so quickly and quietly that other customers usually don't even notice that a robbery is taking place. Bank tellers are instructed to play along with the robbers' demands in such cases, as the bank prioritizes the safety of its customers over the relatively small amount of money these criminals usually demand.

Over the years, real life banks have developed many ways of foiling bank robbers or at least minimizing their take, and stories involving modern banks will have to come up with ways to defeat those measures. Also, stealing gold bars and attempting to fence them is nearly impossible for the average joe without a fence. In many jurisdictions, these measures have resulted in organized criminals moving to the less risky and more lucrative trade of drug dealing.

Side note: In the United States, bank funds are insured by the FDIC, which makes Bank Robbery a Federal offense and often leads to FBI involvement. In fiction, this means Jurisdiction Friction.

Kwinto: Because that's where the money was.

Start of a robbery

While Elena Federova is detained in a FBI black site known as Fort Totten, her subordinates stage multiple bank robberies throughout the Greater New York Area.

Start of a robbery

While Elena Federova is detained in a FBI black site known as Fort Totten, her subordinates stage multiple bank robberies throughout the Greater New York Area.