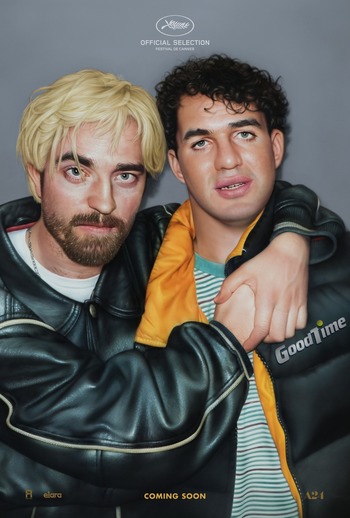 Constatine "Connie" Nikas (Pattinson) is a bank robber from Queens, New York who ends up in a mess when his mentally handicapped brother Nick Nikas (Safdie) winds up in Riker’s Island after a hastily executed bank robbery goes horribly wrong. Connie must now spend the night trying to get Nick out in one way or another, meeting an assortment of characters while also trying to avoid the law enforcement looking for him.

An integral aspect of Good Time's style and atmosphere is derived from its electronic score by Oneohtrix Point Never, which took influence from diverse sources including Tangerine Dream and progressive rock.

The film premiered at the 2017 Cannes Film Festival, where it was selected to compete for the Palme d'Or, before getting a limited-to-wide theatrical release from A24 in August of that year.

Tropes that apply to the film include: