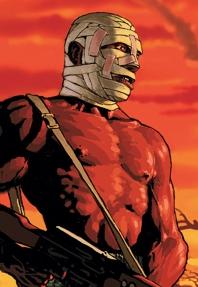 Basically, wearing bandages on the face. The whole face, and (generally) nothing but the face. Usually they're worn because the character's undergone some sort of facial surgery or they are very badly disfigured, though occasionally there are other reasons, such as the desire to keep one's identity a secret.

Covering one's face in bandages serves two purposes: 1) For better suspense when they are unwrapped during a Dramatic Unmask, or 2) As a creepy (and kinda cool) way of disguising yourself.

Compare Bandage Mummy, for when the complete body is wrapped for comedic (or dramatic) purposes, and Bandage Babe, where bandages are used for Fanservice, and Sarashi. Contrast Pointless Band-Aid, where only one bandage is worn on the face.