Film / Once Upon a Time in Mexico 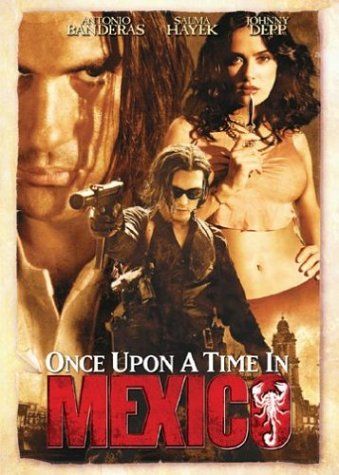 Once Upon a Time in Mexico is the third film of the Mexico or Mariachi Trilogy, directed by Robert Rodriguez.

We open with crooked CIA Agent Sands (Johnny Depp) seeking the legendary gunman El Mariachi, notable for using a guitar case full of guns as his primary weapon. Throughout the movie, El Mariachi's backstory is revealed in a number of flashbacks; prior to the events of this film, his wife Carolina and child were murdered by soldiers of the ruthless Mexican General, Marquez (Gerardo Vigil). General Marquez is working for Barillo (Willem Dafoe), a drug cartel kingpin who has plans to assassinate the president of Mexico and assume power. Mariachi agrees to kill Marquez after the President's assassination, as he will gain too much power if he lives.

Sands proceeds to recruit a retired FBI agent named Jorge Ramirez (Rubén Blades), whose partner was tortured for two weeks and killed by Barillo years earlier. He unwittingly participates in Sands' plot to overthrow the Mexican government and plans to kill Barillo and his lackeys once they outlive their usefulness.

With so many c(r)ooks in the kitchen, it's no surprise that the plan goes completely tits-up.