All Hail the Great God Mickey! 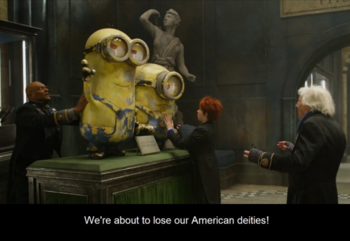 Do these American deities require bananas as an offering?
The Courier: This building is... interesting. What do you know about it?
The King: [in Elvis accent] Near as I can tell, it was some sort of religious institution. Oh, I know it says "school" out front, but everything in here seems to be related to the worship of some guy back in the day. People used to come here to learn about him. To dress like him, move like him. To be him. If that's not worship, I don't know what is.
— Fallout: New Vegas
Advertisement:

In the future, long after our current society has crumbled into nothing, mankind survives. They have been reduced to tribal beings, clinging to the last throes of survival. But all is not lost for humanity, for this tribe has discovered the God of the new world. He shall lead their tribe out of the darkness. He shall bring humanity back to what it once was... wait, is that Abraham Lincoln they're worshiping?

Yes, after all records of society were erased, the poor, confused tribal humans of the future stumbled upon The Constant of their predecessors. It may have been a monument, or it may have been a pop culture icon of the past. But in their confused state, the poor tribesmen have mistaken it for an image of the gods, and have begun worshiping it in kind.

It should be noted that this is a separate trope from Cargo Cult, though the two can overlap. A Cargo Cult is when an object is interpreted as a sign of the gods or a god itself. All Hail the Great God Mickey is similar, but occurs After the End, when the remnants of a past society are mistaken for a sign of the gods. Due to cultural drift, this trope may also be found attached to Days of Future Past.

Compare Future Imperfect and From Cataclysm to Myth. Not to be confused with Disney Owns This Trope. See also Single-Precept Religion.