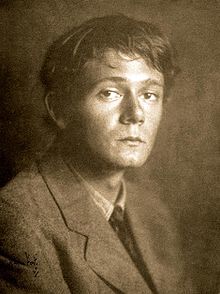 Tell me many tales, but let them be of things that are past the lore of legend and of which there are no myths in our world or any world adjoining.
— Clark Ashton Smith, To the Daemon
Advertisement:

Clark Ashton Smith (January 13, 1893 – August 14, 1961) was an American writer of horror, fantasy and Science Fiction. He is most notable for being one of the founders of the Cthulhu Mythos along with H. P. Lovecraft, Robert E. Howard and others. Smith's early works were influenced by The Brothers Grimm, Edgar Allan Poe, and William Beckford's Vathek, while his early poetry caught the attention of George Sterling, who helped him publish The Star-Treader and Other Poems, his first collection of poetry, and also introduced him to the poetry of Charles Baudelaire, who became another important influence. Smith's 1920 poem The Hashish Eater, or The Apocalypse of Evil prompted H. P. Lovecraft to send him a fan letter, which was the beginning of a lifelong friendship and correspondence between the two.

Like Lovecraft's, Clark's stories were often inspired by the nightmares he suffered in his youth. However, Smith's stories tend to focus less on the Cosmic Horror Story and more on the pure exoticism of the setting. Some Mythos entities recur between them, such as the god Tsathoggua, but these entities tend to be less malevolent in Smith's portrayal than in Lovecraft's. While Smith is best known for his prose stories, he personally considered them secondary to his poetry (sometimes going as far as calling them "quasi-hackwork"), and the vast majority were written to help him raise funds for his ailing parents in the period from 1929 to 1934. After their deaths, as well as that of his friends Lovecraft and Howard, Smith's prose output dwindled dramatically, and he returned to poetry and began sculpting (usually small soft rock sculptures of strange beings).

Sexuality plays a strong role in many of Smith's works and female characters are a lot stronger and more prominent than in Lovecraft. Unlike Howard, sorcerers in Smith tend to have the upper hand against swordsmen and Smith has many sorcerer protagonists, both good and evil. And finally, Smith was not as much a racist or a xenophobe as Lovecraft, which can be seen best in stories like The Great God Awto and A Star-Change, although reading his Zothique stories shows he was still very much a man of his time. Smith was very fond of Purple Prose and one often needs to have a thesaurus handy to fully appreciate the meaning of some of his descriptions.

Smith was fond of playing with tropes and deconstructing pulp traditions, and his stories occasionally feature Black Comedy. The classic Dungeons & Dragons module Castle Amber draws inspiration from his stories set in his fictional Averoigne setting.

Smith had four main settings for his Weird Fiction. In chronological order: