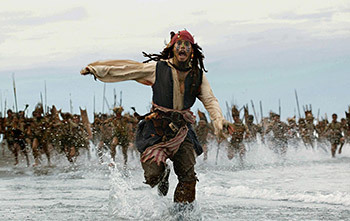 Stock scene for the Adventurer Archaeologist and Evil Colonialist types, the Hollywood Natives are angry at the hero stealing their sacred idol or refusing to be their dinner, or even merely trespassing in their territory. Expect there to be hilariously ineffectual thrown spears and arrows, hooting and jumping as he makes a clean getaway via plane, boat, car, or train.

Of course, this amounts to nothing so much as Mighty Whitey "preserving for posterity" the ancient sacred objects of a "lesser" culture to a place they'll be truly appreciated: a public museum. The natives on the other hand, usually see this as "theft" or "desecration," and hence the pursuit.

Perhaps one of the most cliché things in these adventure movies. But hey, it sets the adventurous, peril dodging tone rather well.

If the villain sets them on the hero, it's Give Chase with Angry Natives. See also Captured by Cannibals.

Compare the Thundering Herd, a more comedic version, and Torches and Pitchforks.

Indy escapes from the Natives

The Hovitos have sided with Belloq and they are not happy with Indy for stealing their golden idol.

Indy escapes from the Natives

The Hovitos have sided with Belloq and they are not happy with Indy for stealing their golden idol.