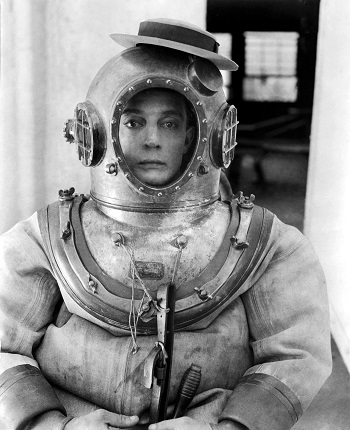 Things do not go smoothly.
Advertisement:

The Navigator is a 1924 silent comedy starring Buster Keaton, who co-directed with Donald Crisp. Buster plays Rollo Treadway, one of his many Idle Rich characters, who in this instance proposes to his girlfriend Betsy because he can't think of anything else to do that day. Betsy angrily rebuffs his proposal, but Buster decides to take the honeymoon cruise to Hawaii anyway.

In the meantime, Betsy's father, a shipping magnate, sells a passenger liner called the Navigator to one of two Banana Republic nations that are at war. Agents of the other combatant nation are in town, and they decide to cut the ship adrift to deny it to the enemy. Betsy and her father arrive at the pier just as the secret agents are cutting the ship loose. Betsy's father is attacked while Betsy winds up on the ship as it drifts away. And if that's not complicated enough, Buster is also on the ship, having blundered onto the Navigator instead of his cruise ship.

All of this elaborate setup is simply to establish the premise of the main story, which is Buster and his girlfriend adrift on the open ocean, and their comic hijinks aboard the cruise ship.