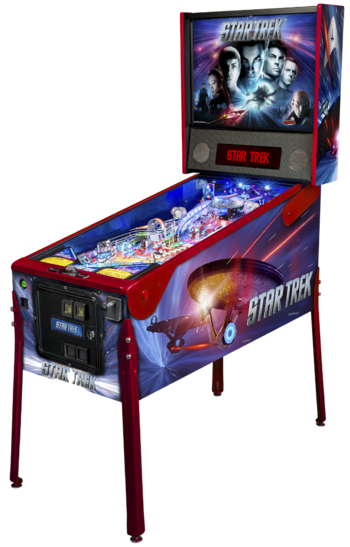 Star Trek is a Physical Pinball Table designed by Steve Ritchie, illustrated by Greg Freres, Kevin O'Connor, and John Youssi, and programmed by Lonnie Ropp, Tanio Klyce, and Waison Cheng. It was released in 2013 by Stern Pinball, making it the fourth licensed Star Trek pinball machine.

Based on the J. J. Abrams' Star Trek reboot, this game focuses on various highlights from both Star Trek (2009) and Star Trek Into Darkness. Players will battle the rogue Romulan Nero and destroy his planet-busting drill, rescue Spock from an active volcano, battle Klingons alongside the mysterious John Harrison, then perform a Space Jump to the Vengeance and Save the Enterprise. The playfield itself is dominated by the Vengeance, which launches pinballs at the player, along with color-changing LED indicator lights, a Warp ramp, and a torpedo-launching Fire Button for the player. Make it through the Kobayashi Maru, the Klingon Multiball, battles with the Vengeance, and all eighteen game modes, and you'll have a chance to prove your worth in the Five Year Mission.

Despite some initial skepticism, Star Trek is generally well-received by many players, who find it to be a fun, fast-action game for all skill levels — the color-coordinated indicators, forgiving layout, and initial rules make it easy and enjoyable for beginners and casual players, while the higher Modes offer more challenge and rewards for experts. The biggest criticism is that the various game Modes come across as too similar, with variations that feel more like Fake Longevity rather than distinctive challenges.

A digital version is available for Stern Pinball Arcade.

Admiral Stevens: "Get out of that chair right now!"