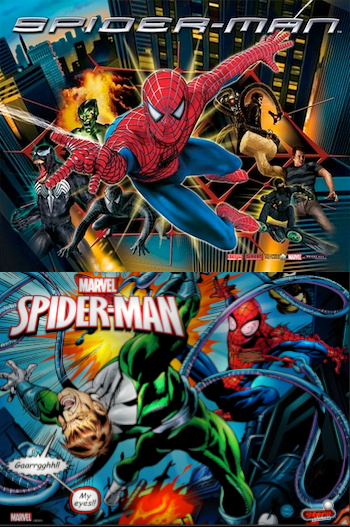 Spider-Man is an arcade pinball game designed by Steve Ritchie, with art by Kevin O'Conner, Margaret Hudson, Marc Schoenberg and Mark Galvez. It was released in 2007 by Stern Pinball.

Based on Sam Raimi's Spider-Man Trilogy starring Tobey Maguire, the game pits the players against the villains of all three movies. Rock the Green Goblin by shooting his pumpkin bombs, build speed by whipping around Venom, then use the webslingers to launch balls across the playfield. Hit Sandman as he rises and falls, but make sure Doctor Octopus doesn't catch you in his tentacles. The game features video and voice clips from the films, and J. K. Simmons reprises his role as J. Jonah Jameson to give player instructions.

In 2016, Stern Pinball released the Vault Edition, an updated version of the game. Unlike other Vault Editions, the game's aesthetics were completely overhauled: the playfield and backglass art were updated with comic book-style illustrations by Mark Bagley from Ultimate Spider-Man, with the dot-matrix animations, audio, and game modes updated to match. The actual playfield layout and rules remain the same, however.

A budget home edition was released in 2017 with the same art style and a completely different playfield.

Jameson: "Eight arms? He should be playing this game!"