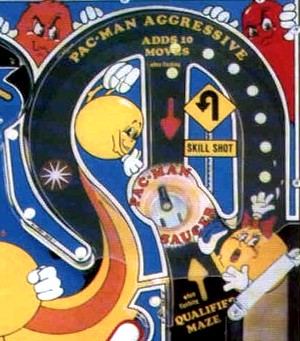 Shoot here — if you can...
Advertisement:

In Pinball games, a Skill Shot is an optional bonus that the player can earn by performing some particular task when launching (or "plunging") a ball. It typically requires either releasing the ball with a particular strength so the ball goes into a certain region, or shooting a specific target, ramp or loop immediately after the ball is launched. Some games have various levels of skill shots, awarding different bonuses depending on which one is reached.

Not to be confused with the popular terminology for a type of attack in Multiplayer Online Battle Arenas, referring an ability that travels to a location/area (and so requires some prediction to hit an enemy) rather than being Homing Boulders that will always strike something you point and click on.