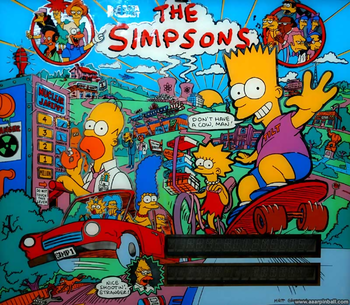 The Simpsons is a pinball machine made by Data East in 1990, based on the classic animated sitcom of the same name (which was currently sweeping the nation at the time of the game's release).

There isn't really a major plot in the game, but most everything Simpsons-related (at least, in its early seasons) is included. The bright, attention-grabbing art and custom speech from the actors helped make it a success; it won the award for best pinball game in 1990 by the Amusement and Music Operators Association.

The game was initially well-received, and it has been credited to helping pinball resurface in The '90s, mostly due to it being one of the first games with a strong theme. Nowadays, however, it's rather hotly contested as to whether it's genuinely a good game, or simply rode the coattails of the show's popularity. Nevertheless it's still regarded as a decent play.