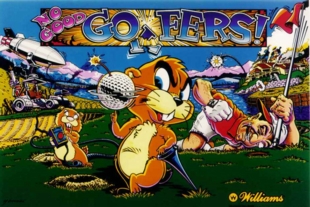 "You're on our turf now!"
Say goodbye to your balls!
Advertisement:

No Good Gofers is a Physical Pinball Table designed by Pat Lawlor, his last table for Williams Electronics. It was illustrated by John Youssi and released in 1997.

The basis of the game involves players taking the role of a golfer for a day on the links. However, it so happens that two gophers named Bud and Buzz claim this course as their home. Feeling that their domain has been taken over, they will do just about anything to make the golfer's day pure hell. Of course, the golfer has tricks up his own sleeve so that the gophers don't successfully interfere with his day.

Being a Pat Lawlor table, No Good Gofers shares many features from his previous tables: There's a third flipper that leads to a high-scoring jackpot shot; a set of dual inlanes leading to the lower left flipper; his standard soft-plunge skill shot; and a whirl-wheel that can alter ball direction. As with Medieval Madness, Chicago's Second City comedy troupe helped with the writing and voices.

Digital versions of No Good Gofers are available in Pinball Hall of Fame: The Williams Collection for Xbox 360 and PS3, and as a downloadable table for FarSight Studios' The Pinball Arcade until their license for all Williams and Bally tables expired on July 1, 2018. It later reappeared in Pinball FX 3 as part of Volume 5.

Not to be confused with Gottlieb's own golf-themed table Tee'd Off.

Buzz: "This must be embarrassing for you!"