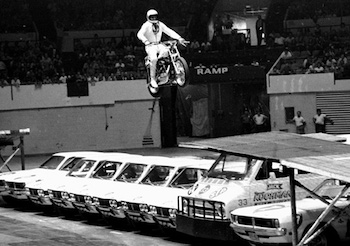 Evel Knievel demonstrating the trope in Real Life.
"So one afternoon, he set out to jump ten milk trucks. He nailed the take-off, but when he landed, something terrible happened. His front tire exploded like a cannonball, and his handle bars went straight through his head. Blood was everywhere. His teeth were ground down to a powder, and the front of his face exploded out the back of his skull. He died instantly... the next day."
— Rod Kimble, Hot Rod
Advertisement:

This is when somebody dramatically jumps over a ravine, river, pit, or other gap by driving a vehicle very fast up a ramp (or something vaguely ramp-like). Often, it's part of a car chase of some sort, with the jumpers either trying to escape somebody, or trying to pursue somebody who took an easier route that's now blocked somehow. People just love to scream "you/we are not going to make it" when that happens. Bonus points if somebody else (especially Lemming Cops) then tries the same jump but fails. If there isn't a ramp handy, you may need to use Ramprovisation.

by MythBusters), a Ramp Jump is nowhere near as easy to execute as it looks in fiction: The car should ideally land with all four wheels hitting the ground simultaneously, but in Real Life, the vehicle will tend to pitch downwards in flight, causing it to hit the ground nose first (instead of on all fours) with an impact force similar to any other head-on impact: Severe damage to the car's engine and frame (doubly so for sports cars, whose frames are specifically designed to crumple on impact note because softening the blow of impact makes the crash less deadly to the driver/passengers), which leaves the car in a more or less inoperable state.

Motorcycles have it a bit easier in this department, as the bike's relatively lighter weight means the rider can shift their center of gravity enough to help avoid the bike tipping over in midair, to ensure a clean two-wheel landing. The professional practice of "loading" helps too — compressing the front springs before takeoff helps keep the bike from tipping over to begin with. However, the risk of landing unbalanced is still very real: Keep in mind just how often professional motocross racers crash, even when they specifically train to make jumps off specifically designed ramps (definitely Don't Try This at Home).

So how do they accomplish such scenes in action movies? With the vehicular equivalent of a Stunt Double, of course! Launch a sacrificial car (even just an empty hull) off the ramp, then quickly cut to a different scene that depicts the heroes (having been launched from a much smaller, safer ramp) making their landing. Nevermind what happens to the stunt car after the cut. If a long shot of the vehicle flying triumphantly through the air is desired, that can also be filmed separately using a third vehicle (launched from a separate ramp under specific conditions). Hollywood movie magic at its finest!

In any case, it's technically possible to set up ramps in such a way that the vehicle can take off and land without tipping over in the process, but this requires some specially contrived setups that you're not likely to see in action-movie scenes involving explosions and high-speed improvisation. But at least it looks undeniably cool, right? Expect to see Slo-Mo Big Air added in for all it's worth.

A Sister Trope to Jump Physics. It can also be tried with horses, as they presumably don't need ramps.