Tap on the Head 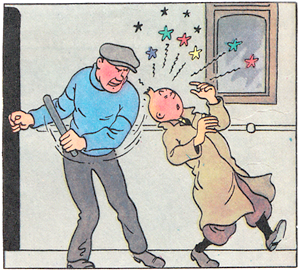 Realistically, Tintin would have had permanent, crippling brain damage by book 12.
"In fantasy, heroes get knocked out, awaken after a while as if from a nap, and plunge right back into action. The truth is, a mild concussion is disabling for periods ranging from hours to days, and as for a severe one, the consequences are not pleasant to watch."
— Poul Anderson, On Thud and Blunder

In fictionland, anyone caught unaware may be easily, instantaneously and noiselessly incapacitated with a single blow to the head (or alternatively, a karate chop to the neck). A character thus treated will usually be perfectly fine afterwards; oh, they may have a headache, dizziness, slightly blurred vision, or in the very worst cases, Laser-Guided Amnesia, but this is nothing compared to the real danger — the Bad Guys standing around the operating table (or other heavy piece of furniture) to which they find themselves tied down. For heroes, this is the perfect way to dispatch the villains. When you knock them out cold, you don't have to worry about breaking any moral codes or violating the censors on weapons, guns and blood. In other words, when fictional characters take a blow to the head, they'll suffer nothing worse than an unplanned nap. (This is why In the Back does not apply — hitting someone from behind is not really dangerous.)

For obvious reasons, not Truth in Television. Any sort of damage to the brain, even 'minor' trauma, can have devastating results. It's the difference between turning a computer off by shutting it down and by hitting it. The latter is likely to cause serious long-term damage.

Most real life unconsciousness due to injury lasts only a few seconds, not some indeterminate amount of time lasting hours or days during which our hero can be carted around, dressed/undressed etc. If you are out longer than a few minutes, some combination of brain damage, coma, cranial bleeding, loss of motor and cognitive functions, and amnesia is going to greet you when you wake up — if you wake up.

The "karate chop to the neck" version may have been removed from modern TV because if you hit the right spot it actually can knock you out, though not without serious risk of death. It utilizes the Carotid Sinus Reflex (the reason you should not take a pulse at the neck) and is very dangerous. There have also been depictions in productions as varied as the lighthearted I Spy and as dark as Callan in which neck-chopping unambiguously is shown to be fatal because it breaks the target's neck, which circles back to unrealistic — breaking a person's neck takes a lot of force.

Other variants of the trope:

See also Frying Pan of Doom, Rolling Pin of Doom, Back Stab, Blinded by the Light, Choke Holds, Instant Sedation, Pressure Point, Put Their Heads Together, Flower-Pot Drop. Contrast Death by Falling Over. Often leads to Waking Up Elsewhere. Pistol-Whipping is a Sub-Trope. Non-Lethal K.O. is a related trope in video games. Can be used to initiate an Injury Bookend.

Example of:
Working Through the Cold