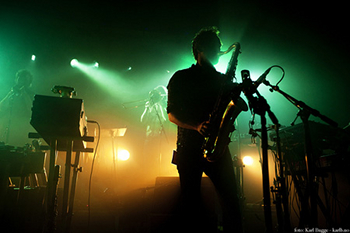 Live at Molde International Jazz Festival, 2009.
"I think you can hear with many Norwegian acts that they're from Norway, especially in the jazz scene, that they have some kind of melodic, Nordic thing going on. With Jaga I try to steer away from it, but I grew up with ECM Records and all that stuff so it's in our system. And here in Norway it's really hard to get on the radio without being really nostalgic. Everything has to be kind of depressing to be popular."
— Lars Hornthveth, in an interview

with The Quietus
Advertisement:

Jaga Jazzist is a band from Norway whose style defies categorization beyond the vague label of Nujazz. They began as a mix of big-band jazz and trip-hop (on Grete Stitz), then they added drum-n-bass and other electronic influences (on A Livingroom Hush and The Stix). Then they added Post-Rock (on What We Must), then Progressive and Math Rock (on One-Armed Bandit).