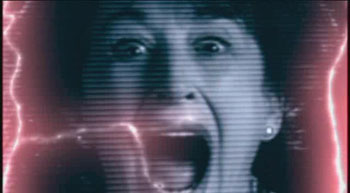 The one with a bastard father and a ham-tastic alien.

Alternatively, the one with a comically heavy usage of Dutch Angle.

Also alternatively, the one where the Doctor and Rose obtain a lot of glee from trolling a douchebag...

The Doctor and Rose visit the 1950s, intent on seeing Elvis Presley perform on The Ed Sullivan Show. The TARDIS takes them to Muswell Hill in North London instead, a day before the Queen's coronation in 1953.

The coronation is going to be televised, which has the populace excited. Televisions are at a premium. Luckily, the owner of a local television store, Mr Magpie, is practically giving them away. That's because it's got a face-eating monster called the Wire (no, not that one) inside. The Wire feeds on energy, specifically on the faces of the people watching her. Mr Magpie can count on people in The '50s to keep anyone who's different, such as a faceless family member, tucked carefully away out of sight.

The Doctor sports some marvelous aviator sunglasses and a quiff with unequalled resilience to motorcycle helmets, but even that can't keep Rose from getting her face eaten. The Doctor and an abused kid called Tommy storm the TV store and meet the Wire. Mr Magpie puts the Wire into a portable TV and runs off to put her in the broadcasting tower at Alexandra Palace. The Doctor climbs up after Magpie (masquerading as the King of Belgium to get past the guards) and sort of electrocutes everything. Magpie is disintegrated by the Wire, the Wire is trapped in a Betamax tape and everybody gets their faces back. Tommy's bastard of a dad is kicked out of the house by his wife as everyone learns an important lesson about speaking out when things are bad. The Doctor and Rose, however, encourage Tommy to chase after his dad and see if he can't Take a Third Option — because even abusive 1950s fathers are still fathers. As for the Wire, the Doctor mulls over plans to tape over her someday (hopefully not with an episode of The Wire).