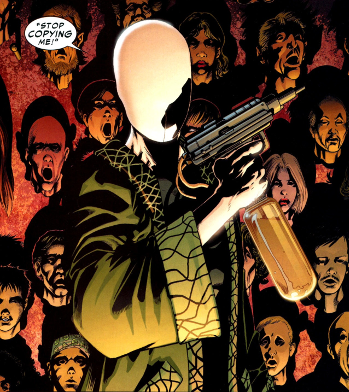 "Parker! I never get tired of seeing that face. No matter how times I've cloned it, masked it, unmasked it, liquified it or worn it as a little hat."
— The Jackal, Spider-Island
Advertisement:

Voluntary Shapeshifting is a really powerful and useful ability for a character to have. However, shapeshifters occasionally run into a problem of logistics (other than the usual ones); how do they get the information to change shape? Sometimes it is enough just to look or touch whatever the character wants to change into.

Other times, nastier things have to be done. Some face stealers — almost exclusively villains — must kill a person in order to take their form. While sometimes any body part will do, the purest form involves removing the target's face. Occasionally the victim will even survive, perhaps being left as The Blank until they can steal their face back. Either way, this has the added benefit of making it impossible for the original owner to show up and ruin the charade.

Named for One-Scene Wonder Koh of Avatar: The Last Airbender, who steals any face he sees that doesn't have an emotionless expression.

Occasionally an application of Cannibalism Super Power in which case it's You Are Who You Eat, although skinning the target is just as common. See Kill and Replace, which is what this trope often leads to. Compare Physical Attribute Swap. Contrast Clone by Conversion, where the victim is the one who assumes a different form. See Beast with a Human Face for when the character has a human face for another reason. A subtrope of Collector of Forms and Transferred Transformation.