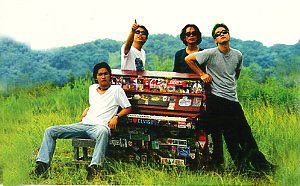 A Generation of Filipinos fondly remembers the band that made a very large impact on their lives.

A no-name, Indie College Garage Band which became a massively popular hit and ushered in a new era of the popularity of Alternative Rock in the Philippines. Comprising of Ely Buendia, Marcus Adoro, Buddy Zabala, and Raimund Marasigan, The Eraserheads rose from being rag-tag college students to become the so-called demigods and pillars of the Pinoy Rock setting, influencing a new wave of Alternative rock bands in the Philippines. Most of their notable songs were written in Tagalog, while some are in English.

During their time, when the Philippines was just fresh off the nostalgia of The '80s, love songs and disco pop were the common fare among people. The Eraserheads were commended for breaking the tradition by writing feel-good songs that spoke of the life of The Everyman.

However, as with many good things, they are not made to last.

Over a misunderstanding with their band roadie, Buendia left the group. Adoro followed suit, but for a more personal reason. After disbanding, the members began to start their separate musical careers. Buendia formed a new band, Pupil, while Marasigan decided to bring his other band projects, Sandwich and Pedicab, to the mainstream. Zabala joined the lineup of the revived Filipino band The Dawn as it's bassist, while Adoro retired to La Union, Philippines as a surfing instructor, occasionally making appearances in Manila as a solo artist.

A Jukebox Musical based on their discography, Ang Huling El Bimbo, was released in 2018.

Albums released by the Eraserheads include:

The Eraserheads provides examples of: