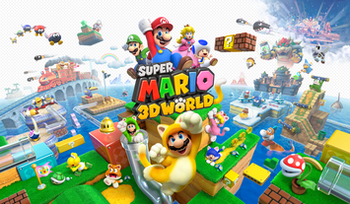 Super Mario 3D World is a 3D Mario platformer that was released on November 22, 2013 for the Wii U.

Mario, Luigi, Peach, and Toad are enjoying a nighttime meteor shower on Peach's Castle grounds when they come across a transparent warp pipe sticking out of the ground. After Mario and Luigi fix it, a green pixie (known as one of the seven Sprixie Princesses) comes out of the pipe. She explains that Bowser has kidnapped her friends—and then Bowser drags her back into the pipe, ignoring Peach this time around in favor of his new prizes. The four follow him and his captive down the pipe, where they find the Sprixie Kingdom, a world they must work together to traverse in order to defeat Bowser once again.

Like Super Mario 3D Land on the Nintendo 3DS, it is a 3D Mario that plays like a 2D Mario. Additionally, just like New Super Mario Bros. Wii, up to 4 players can play simultaneously, though the different characters will play differently like in Super Mario Bros. 2. Alongside a new "Cat Suit" power-up enabling characters to scratch enemies and climb up walls, 3D World marks the first time since Super Mario Bros. 2 that Peach and Toad can be selected for play, as well as reintroducing the concept of having significant ability differences between the characters.

Despite its name, this has nothing to do with the Super NES game (aside from some returning enemies). It does, however, mirror the relationship between Super Mario Land and World by aiming to be a bigger console game than its original handheld adventure.

Captain Toad received his own spin-off based on his puzzle-oriented stages in this game, titled Captain Toad: Treasure Tracker. And in 2019, Super Mario Maker 2 incorporated a game style based on this game.

On September 3, 2020, as part of the 35th anniversary of Super Mario Bros., it was announced that the game would get an Updated Re-release titled Super Mario 3D World + Bowser's Fury for the Nintendo Switch on February 12, 2021. The rerelease includes various gameplay tweaks and additions such as 20% faster character movement, movesets now incorporating abilities from Super Mario Odyssey, online multiplayer with friends, a new "Photo Mode" to replace the original game's Miiverse functionality, and an improved camera.

The Switch version also includes a new side campaign entitled Bowser's Fury. Examples for that game should go on its page.

After beating Bowser in the first and penultimate battles with him, the bridge gives way along with his car. It takes a couple seconds of Bowser hanging in midair and flailing comically before gravity takes him as well.

Example of:
Gravity Is a Harsh Mistress

After beating Bowser in the first and penultimate battles with him, the bridge gives way along with his car. It takes a couple seconds of Bowser hanging in midair and flailing comically before gravity takes him as well.