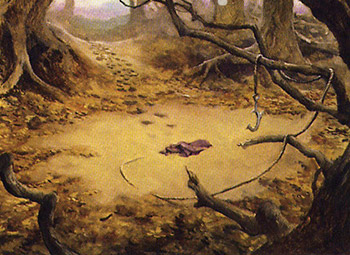 Looks safe, right?
"What is it that's not exactly water, and it ain't exactly earth?"
— Bart, Blazing Saddles
Advertisement:

Quicksand is a common and deadly element of swamp, jungle, and desert terrain. Science Fiction stories written before the Moon landings are also liable to describe thick layers of extremely fine lunar dust on the Moon's surface that are treated as functionally equivalent to quicksand. In all cases, its most dangerous feature is its ability to suck people and animals down and drown them in a malevolent blend of sand and water. Although most victims blunder blindly into quicksand, it sometimes seems that the merest touch of an extremity is enough to pull the unwary into its muddy and all-consuming depths like iron filings to a magnet.

Originally a movie serial and B-film device, this trope has been carried over to television by way of programs that mimicked or paid homage to those films, or to pulp fiction in general. Then it also moved to Video Games. This trope is a Discredited Trope nowadays, although the Shifting Sand Land of video games is still allowed to play it straight, as a gameplay challenge if nothing else. In particularly challenging versions, enemies will come out and attempt to drag the player to the depths, making them somewhat similar to Instakill Mooks if sinking in quicksand is an instant-death condition (and it often is). In movies, it is often used to set up a Chekhov's Gun scenario in which the hero stumbles into it and escapes early on, in order to set up for a villain to die that way later in the film.

In truth, quicksand (while real) isn't terribly common; exerts none of its movie counterpart's mythical "sucking" power; and isn't nearly the Sticky Situation the movies made it look like. In fact, real quicksand is so dense that you can't sink in it (with more than half your body). The usual advice for someone who finds themselves caught in deep quicksand is to simply relax and float on their back. Struggling in a panic may actually cause you to drag yourself down instead of up, and survival guides stress the importance of staying still if this starts to happen. While animals and people do sometimes die in quicksand, it's almost never from drowning — it's from exposure, dehydration or predation after exhausting themselves struggling to get out. However, with the right combination/consistency of sand, clay, water, and salt, it is nearly impossible to escape some quicksand without help.

You could sink if you are weighed down by something you can't remove... but that would happen even in boring old regular water. Indeed, real quicksand requires water, and writers are traditionally unfettered by such technicalities. Fictional quicksand tends to be placed in the desert, or away from a river or any apparent source of water; although a hidden spring could in theory create quicksand in surprising places. In live-action, budget and set-design constraints sometimes lead to a "quicksand pit" barely large enough to hold the actor. Technically speaking, desert quicksand is hand-waved as being very loose sand that looks normal, but is incapable of supporting a large amount of weight.

Although not always strictly "sand", tidal flats (mudflats) have silt and mud which is actually closer to the danger portrayed in fiction as quicksand. The tide regularly refreshes the surface and smooth implies solid to people. Viscosity decreases after an initial stress. More to the point, being a tidal flat, it's a case where people actually ARE at risk of their lives, since tides have this funny way of coming back in after going out. There are tidal flats which have seen so many deaths the locals are tired of watching stupid people die, but it's not wholly clear how much that is getting stuck in one specific spot versus getting trapped some distance from dry ground on slow-to-traverse terrain or attempting to wait on an insecure bit of slightly higher ground as the tide comes in around you.

There is also a hazard in nature called a "predator trap", where an animal gets itself hopelessly stuck in thick, sticky mud or tar and its corpse attracts the attention of multiple carnivores, causing them to become trapped and die of exposure as well — sometimes becoming fossil goldmines. (The La Brea Tar Pits in Los Angeles are a well-known example of one of these fossil troves.)

Quicksand's ability to trap things largely relies on its interesting physical properties, being subject to a phenomenon in common with numerous other non-Newtonian fluids called shear thinning

. When at rest, quicksand appears to be very hard, and its viscosity may be such that it can support the weight of lighter objects on it. However, if given sufficient agitation or shock (the margin of which is extremely narrow), the mixture of water and sand/silt becomes increasingly more elastic as it liquefies, and this is the point where objects begin to sink. As mentioned above, this is the point where it becomes dangerous to be around quicksand, as once objects have begun to sink, they reach a point where their buoyancy won't bring them down any further, but the surrounding material returns to its rigid state through shear thickening if more force is applied, thus holding things in place and leaving them at the mercy of further danger from the surrounding environment.

See also Sand Is Water, Mucking in the Mud, Swamps Are Evil, and Bubblegloop Swamp... Also compare Unrealistic Black Hole, because both black holes and quicksand are portrayed in media as pulling in anything nearby, whereas in reality both only consume things which have gotten too close in the first place.