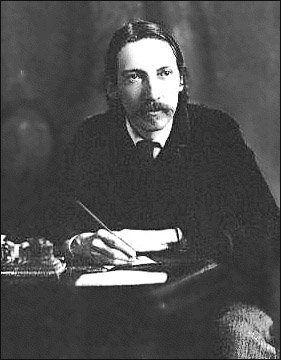 Robert Louis Balfour Stevenson (13 November 1850 – 3 December 1894) was a 19th century Scottish writer and traveler who is well-known for his novel The Strange Case of Dr. Jekyll and Mr. Hyde (the plot was revealed to him in a dream), as well as other novels such as Treasure Island and Kidnapped. However, his bibliography is very extensive, as he also wrote poetry and several essays.

Stevenson was admired by many higher-ups in literature such as Jorge Luis Borges and G. K. Chesterton. Both of them were great fans of Stevenson's accessible, nigh-perfect prose. Henry James liked his works so much that he used Treasure Island when needing an example of a novel that perfectly did what it set out to do.

Though he wrote many books, his work was drastically cut short, as Stevenson died at 44 due to health problems in Upolu, one of the Samoan islands. The inscription on his tombstone became a well-known and still-sung Grief Song for many Samoans.

Some of his stories are:

Most of his works can be read at Project Gutenberg.

His works contain examples of the following tropes: