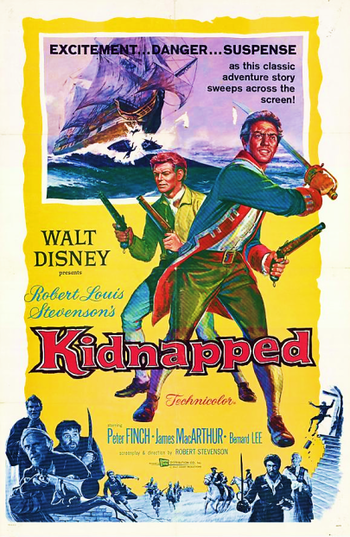 A poster for Disney's Film of the Book.
Advertisement:

Kidnapped is an 1886 Historical Fiction adventure novel by Robert Louis Stevenson. It is set in 18th century Scotland and includes real people and events. A lesser-known sequel, Catriona (or David Balfour, depending on your country) was published in 1893.

David Balfour's father has just died, leaving him with a letter of introduction to be given to Mr. Ebenezer Balfour of the House of Shaws - a person and place David has never heard of. Nevertheless, he goes to the House of Shaws, which turns out to be a near-ruin, and Mr. Ebenezer Balfour turns out to be his uncle. The two do not get on well, and Ebenezer tries to kill David. When this fails, he pays Captain Hoseason, a friend of his, to take David to the Carolinas to be sold as a slave. Then the ship David is a prisoner on hits a fishing boat and as a result gains a new passenger, Alan Breck Stuart, who the Captain plans to have killed. David warns Alan, and the two become friends. Then the ship is wrecked, and things go from bad to worse...

. It has been adapted multiple times, including a 1960 Disney version.

Not to be confused with the NBC cop show or the MTV game show.