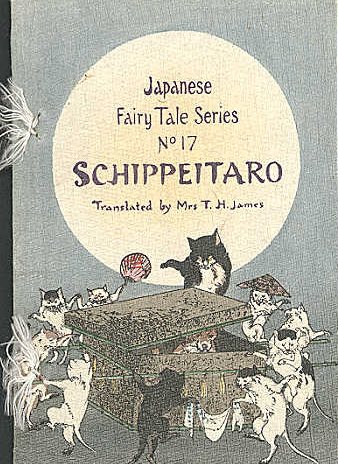 Schippeitaro is a Japanese Fairy Tale. Andrew Lang included it in The Violet Fairy Book.
Advertisement:

A young man set out for adventures, and met and fought bandits, but found nothing to make himself famous. One day, he got lost in a great forest, and took shelter in a small chapel. At midnight, he was roused by cat spirits dancing about and warning each other, "Do not tell Schippeitaro!"

The next day, he found a village where a woman was weeping, because she had been chosen to be the next sacrifice to the Spirit of the Mountain. He asks after Schippeitaro, and learns it's a dog whose owner is nearby. He persuades the owner to lend him the dog and persuaded the maiden's parents to shut her up in a closet and let him put Schippeitaro into the cask where the sacrifice was offered.

The cats reappeared in the chapel, and the biggest of them went to open the casket, whereupon Schippeitaro killed it, and he and the young man killed many more. After that, no more sacrifices were made. The villagers rejoiced over the young man and Schippeitaro.