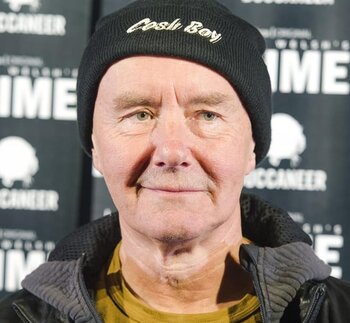 some caption text
"When you get older, it's harder to be a bastard."
—From the 2018 The Guardian interview

Irvine Welsh (born September 27, 1958) is a Scottish author famous for his mind-screwy, profane, darkly comic and profound novels, all centering on Scottish delinquents (or former Scottish delinquents) and their dysfunctional families, drug addictions and mental perversions. How fun!

Mr. Welsh has his very own page of Nightmare Fuel.

In recent years, Welsh's go-to choice for the narrator of his audiobook treatments has been Tam Dean Burn, another Leith native. Burn handles the voices of all characters himself, and affects accents for those coming from places outside of the city. Earlier in Welsh's career, there were adaptations with multiple cast members instead.