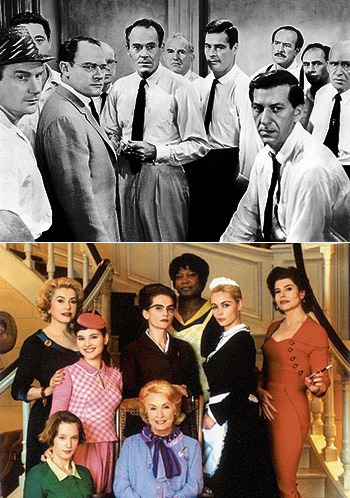 Works which feature only male named characters or only female named characters, but not both. As the examples below demonstrate, most works like this tend towards the former. Commonplace in works in which the setting would necessitate such a casting choice: prison dramas, war films, sports dramas, etc. However, if employed in settings in which one would expect a gender diverse cast it can come off as incongruous (in some cases to the point of raising Unfortunate Implications). Depending on the choice of gender, it can serve as either the logical extreme of The Bechdel Test, or The Smurfette Principle minus the Smurfette herself.

Note that all of the characters have to be explicitly male or female to qualify for this trope: the presence of named characters with an Ambiguous Gender, characters with Bizarre Alien Sexes, or simply individuals with non-binary gender identities automatically disqualify a work from being an example of this trope.note In theory, if a given work only featured non-binary characters we could create a third section for those works, but it hasn't come up yet.

See also Sliding Scale of Gender Inequality, which concerns how the different genders are represented in media (this trope fits for the two extremes of that scale), Gendercide (when the reason of featuring only one gender was caused by in-universe Depopulation Bomb), Improbably Female Cast (female-dominated casts in unlikely situations), The Smurfette Principle (when a single female character is featured in an otherwise all-male cast as a sop to gender equality), and The One Guy (the much less common Spear Counterpart). Contrast Gender-Equal Ensemble, which averts this trope completely. Compare Monochrome Casting, the equivalent of this trope in race/ethnicity. Common for works with a Minimalist Cast.

Note: This trope can account for edge cases, such as when the only characters of the opposite sex are background characters, extras, Mooks etc., but have no especial bearing on the plot or significant role in the work.