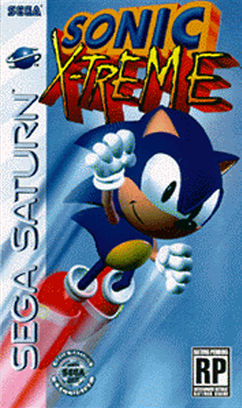 The Sonic game which never was.
Advertisement:

If you ever wondered why Sega never made a mainline Sonic game for the entire lifespan of the Sega Saturn, the answer is that they did. Or more so, they tried to. It was just never finished.

Originally intended for the 32X under the codename Sonic Mars, Sonic X-treme was a Platform Game developed by Sega Technical Institute. Intended to be the franchise's big transition from 2D to 3D gameplay, the game began production in late 1994 before being unceremoniously cancelled in '97.

Following the release of Sonic 3 & Knuckles, series co-creator Yuji Naka and the Japanese staff at STI returned to Japan, while all the other members of Sonic Team remained in the U.S. While Naka and co. were off making NiGHTS into Dreams…, the Americans were assigned to make a new Sonic game.

What exactly the plot would entail changed a lot throughout development: It was originally conceived as taking place in the same continuity as the cult Sonic the Hedgehog (SatAM) cartoon on which the Archie comic book series was based, along with popular Canon Foreigners like Princess Sally and the Freedom Fighters, but Sega nixed that idea. (Sally and the gang had blink-and-you'll-miss-it cameos in Sonic Spinball in '93, along with characters from Adventures of Sonic the Hedgehog which ran parallel to Sat AM.) Other ideas ranged from Sonic battling demons who were sealed in the Master Emerald (a kernel of this idea made it into Sonic Adventure in '98) to him trying to make it to a hot date with Tiara Boobowski, a Manx cat whose status also varied in development. Many of these pitches involved playing as Tails and Knuckles, plus the new addition Tiara. But as the production shifted to the Saturn, it was agreed that Sonic should be the sole playable character in order to keep things simple.

Sonic X-treme was planned to have two gameplay modes. Standard levels would have a fisheye camera known as the "Reflex Lens" which made levels appear as though they were moving around Sonic. Levels would also rotate around a fixed center of gravity as though they were small planetoids, allowing Sonic to run up walls and ceilings. If this sounds familiar, some of those ideas were realized in Sonic Lost World 17 years later. Meanwhile, boss stages were free-roaming, with the boss fights themselves fixing the camera on an enemy in the middle of the arena, and Sonic running rings around them.

So what led to the game's cancellation? Basically, the dev team was split into two (Team A and Team B). One team would concentrate on platforming stages and the other on boss stages. Team A's engine for the platforming stages ran great on computers, but struggled on the Saturn's hardware. They managed to get it working decently, but the team members who were supposed to demo it were just seconds late to a meeting held with CEO Hayao Nakayama in March '96. Team A ended up demo'ing the beta version to Nakayama, who demanded that all of their inferior work be scrapped and the entire game be done in the style of the boss stages. And to get the game done by Christmas to compete with Super Mario 64.

Team B's attempts to make this happen lead them to use code from the engine from NiGHTS to ease development, but when Yuji Naka heard of this, he went bananas and threatened to quit Sega if Team B's engine wasn't scrapped entirely. The stress of having to complete a game from absolute scratch in only a few months made the project head, Chris Senn, contract pneumonia. Told by his doctor that he'd quite literally die within months if he kept working at his current pace, he left the project and the game as a whole was cancelled. With no 3D Sonic to speak of, Sega decided to port over Sonic 3D: Flickies' Island (known in the West as Sonic 3D Blast) in its stead.

Sonic X-treme's failure to show up on shelves has been largely pointed to as one of the reasons why the Sega Saturn was a commercial failure outside Japan: the Saturn was already lacking entries in many of the prominent series that brought Sega success in Western regions, so the lack of a new mainline installment in their biggest franchise left the Saturn without the guaranteed Killer App. This wasn't helped by the fact that rivals Nintendo and Sony had brought to the table their own 3D platformer offerings for their respective consoles earlier that year. The Sonic series wouldn't receive a 3D installment until Sega got Sonic Team to revamp the series for the Sega Dreamcast. Meanwhile, the game's cancellation is blamed for why developer STI dissolved shortly afterwards.

and the hilariously ironic commercial here

. For more detail on the game's development, see this three-part video series

by YouTuber miiyouandmii2, as well as and Sonic Retro's comprehensive

which includes information on characters, stories, scripts, and artwork.

In 2020, a few fans began Project SXU: an attempt to remake what was seen of X-Treme in the Unity game engine to finally made playable the Sonic game that never was. The first demo released August 2020

, recreating two of the levels seen in the trailer. Additional information on this project can be found here

As a sidenote, this game was at one point meant as a tie-in for a proposed live-action film

called Sonic the Hedgehog: Wonders of the World. The plot of the movie would have involved Sonic and Robotnik escaping from Sonic X-treme into the real world. In addition, there was also a Christmas Episode based off the animated show Adventures of Sonic the Hedgehog titled "An X-Tremely Sonic Christmas" in development to promote the new game as well. However, instead of being scrapped like the proposed live-action film, the Christmas episode was simply renamed "Sonic Christmas Blast" after the game's cancellation.