Theatre / The Prince of Tennis 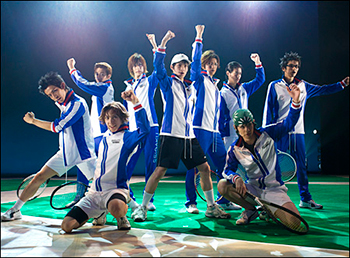 The Prince of Tennis Musical (ミュージカル・テニスの王子様 Myūjikaru Tenisu no Ōji-sama), also known as "TeniPuri Musical," "Tenimyu," or "GekiPuri" (Stage Prince), is a series of live action stage musicals directed by Yukio Ueshima based on manga series The Prince of Tennis created by Takeshi Konomi and serialized by Shueisha in Weekly Shonen Jump.

What Sera Myu is for the Sailor Moon franchise, Tenimyu is for Tenipri. These musicals have become a veritable cash cow in of themselves since their origins in 2003, and have been one of the major places aspiring male idols or young male stage actors get to shine. With a run of seventeen years and counting, Tenimyu shows no signs of stopping.

In 2020, the musical franchise began adapting Shin Prince of Tennis, starting in December.

The Musicals, in order of performance are as follows:

Musical: The Prince of Tennis