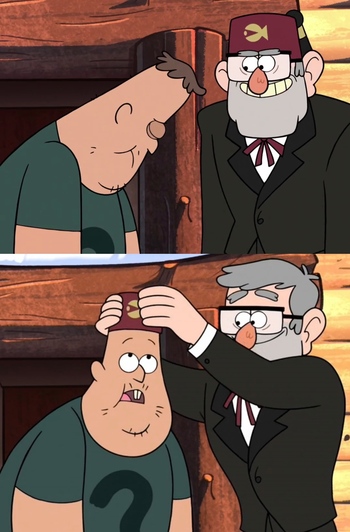 A literal and figurative pass of the hat.

"Take up our quarrel with the foe:
To you from failing hands we throw
The torch; be yours to hold it high."
— John McCrae, In Flanders Fields

The Hero wishes to leave the business. Perhaps the thrill is gone. Perhaps he wants to settle down and marry more than he wants to adventure. Perhaps he knows that age or injury has slowed him down too much; he can not do the job anymore.

But the job has to be done. It's time to pick a successor.

The Hero, therefore, formally hands the work over to someone else who can do the job. Perhaps a sidekick promotion or a former apprentice. A Legacy Character may involve this.

Usually, the immediate problem is gone, and the hero is leaving on a high note, but both he and his successor are aware that the problem or that type of problem will happen again; he has not fixed the world. Therefore, the Master-Apprentice Chain is about to take effect.

If the hero wants to leave, this can form a Happy Ending. The less he wants it, the more a Bitter Sweet Ending it is.

Differs from Take Up My Sword in that the hero is still around and may be up to the role of Old Master. If the hero dies very quickly afterward, it can overlap with Take Up My Sword. However, it usually happens in the beginning or middle of a story; Passing The Torch is usually an Ending Trope. The only time it can happen at the beginning is if he were the hero in the backstory (or prior installment) and in the main story is already the Mentor Archetype.

May be physically embodied in an object that the retiring hero gives the new one.

Opposite of 10-Minute Retirement and He's Back.

Subtrope to Changing of the Guard, where the role of main character changes for any reason or by any procedure. Passing The Torch requires either the Hero to be part of the succession planning and/or handing off the office either personally or by explicit proxy.

See also Spinoff Sendoff‎, a way of "passing the baton" from one series to another.

Morgana decides to retire as queen of the Earth Fairies to spend time with Roxy, and gives her position to Nebula.

Morgana decides to retire as queen of the Earth Fairies to spend time with Roxy, and gives her position to Nebula.