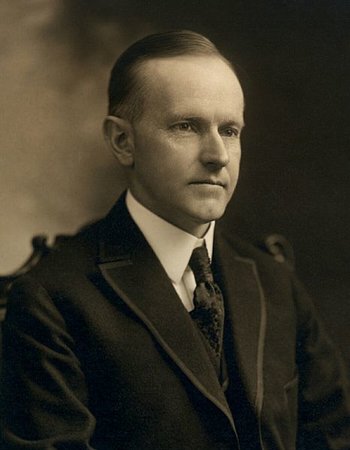 "After all, the chief business of the American people is business."
"Coolidge made The Roaring '20s roar."
— Jonathan Coulton, "The Presidents"
Advertisement:

John Calvin Coolidge Jr. (July 4, 1872 – January 5, 1933) was the 30th president of the United States, serving from 1923 to 1929. He was Vice President when Warren G. Harding died in 1923. Coolidge won a full term for himself the next year, and remained in office until 1929, when he was followed by Herbert Hoover. He was the 11th president from the Republican Party.

He got his start in Massachusetts state politics, rising to the head of the state Senate and eventually serving a term as governor before being chosen as Harding's running mate. Harding hadn't actually wanted Coolidge as his running mate, but his primary rivals at the Republican National Convention conspired to get Coolidge nominated over his preferred choice, Irvine Lenroot, in revenge for what they saw as the underhanded tactics that gained Harding the nomination. (They also approved of how he'd beaten the Boston police strike the year before.) This predictably ended in a case of Reassignment Backfire when Harding suddenly died — and even if he hadn't, he might well have either been impeached or forced to resign due to the Teapot Dome scandal — elevating Coolidge to the White House.

Sworn in by his father, a justice of the peace, late at night on the Coolidge family Bible after hearing of Harding's death, Coolidge may have represented the real return to normalcy his predecessor had called for. One of his slogans was "Keep Cool with Coolidge." He was popular in his day, but due to his lack of charisma and hands-off governing he's not remembered much now. Most people remember Prohibition and the rest of The Roaring '20s instead.

When people do remember him it is most often for his legendarily taciturn temperament, which earned him the nickname "Silent Cal". Like most old-fashioned New Englanders, he never used twenty words when one would do the trick, and never used ten words when a simple nod would suffice. President Coolidge's wife, Grace, once recounted the story of a young woman who, seated next to Silent Cal at a dinner party, confided to him that she had made a bet that she could get at least three words out of Coolidge. Coolidge had simply looked at her and replied, "You lose." However, Coolidge wasn't quite as silent as his reputation suggests — he was the first president to have his inauguration broadcast on radio, and he met with the press and reporters hundreds of times while he was in office.

This tendency towards minimalism which Coolidge demonstrated in speech was also reflected in his philosophy of governance, to do as little as necessary. Coolidge believed that 90% of impending problems would solve themselves before they ever became serious (a philosophy that reportedly made him Ronald Reagan's favorite president). Ultimately, this hands-off philosophy has led to him being considered more relevant as a source of amusing anecdotes than as a president.

Coolidge was known for his honesty and responsibility, which helped bring faith back to the federal government following the Harding presidency's scandals. While often criticized for taking a hands-off approach to being in charge of the country, Coolidge mostly just kept silent in public — behind the scenes, he was a hard worker. Taxes were pretty low during his time and the government was pretty lax with business. While this did help cause the huge economic boom of the 1920s, many economists believe the rapid growth on easy credit and overproduction were at least partially responsible for the Great Depression that started just months after Coolidge's time in office. Still, times were pretty good for most of Coolidge's presidency, with a growing middle class and (gasp) budget surpluses. The only president since who has had surpluses was Bill Clinton, who also benefited from a prospering economy.

He was also notable for his strong opposition to nearly all forms of federal aid paid for by taxpayers. His refusal to do anything about the economic instability of Great Plains farmers by sending federal aid ended up backfiring, since federal aid could have prevented the Dust Bowl from becoming the almighty disaster it would become. Coolidge also didn't do much after a horrific flood along the Mississippi River in 1927, the worst river flood in American history and a tragedy very similar to 2005's Hurricane Katrina, killed hundreds and displaced thousands. Secretary of Commerce Herbert Hoover, though, went there to raise relief efforts. Hoover, who had already set his sights on winning the Republican nomination for the next year's election, also made a deal with prominent African American leaders (the ones worst affected by the flood were poor blacks): if they got blacks to vote for Hoover next year, he'd champion black causes while in the White House. Hoover never did (to be fair, the Depression that affected every American of every color took up most of his attention) and the black vote began to leave the Party of Lincoln for Franklin D. Roosevelt and the Democrats.

Like Harding before him, Coolidge was not in favor of America joining the League of Nations. His Secretary of State, Frank Kellogg, and France's foreign minister, Aristide Briand, negotiated what is known as the Kellogg-Briand Pact; several countries signed it promising not to use warfare to settle disputes with other countries. It essentially outlawed war, and, as we all know, it failed, but it did influence some of the post-WWII peacemaking process to some degree.

Coolidge was also somewhat ahead of his time when it came to combating racism: he spoke in favor of full civil rights for African Americans, he criticized those who thought America was merely a "white man's" country, called for legislation against lynching, which he called a "hideous crime", and signed the law which finally granted full U.S. citizenship to all Native Americans. Unfortunately, he also signed a highly restrictive and rather racist Immigration Act of 1924, which severely limited the number of immigrants from Southern and Eastern Europe and Eastern Asia, though he did so under protest and took his sweet time doing it. The act had overwhelming support from Republicans and Democrats in both houses of Congress, and Coolidge thought that vetoing it would be a useless gesture.

His 1924 reelection saw the lowest voter turnout of the 20th century, with a mere 48.9% of Americans who were eligible to vote that year doing so. To put that in perspective, the election of 1916 saw 61.6% voter turnout. Yikes.

His son, Calvin Coolidge Jr., died of septicemia at age 16 after a blister on his foot became infected. He had been playing tennis in the White House gardens while wearing new shoes without socks. This may or may not have had something to do with his father's inaction during the presidency, as Coolidge, like three presidents before him, was never quite the same after his son's death. He chose not to seek a second term, and died at age 60 in 1933, less than four years after leaving the White House. (His wife, Grace, died in 1957 at the age of 78, while the couple's other son, John, died in 2000 age 93.)

There is a psychological/biological condition named after him — the "Coolidge effect." It refers to situations where someone (almost always male) has renewed sexual interest and energy because new ... uh, stimulus has entered his life. The story goes that Coolidge and his wife were given separate tours of a government farm. When Mrs. Coolidge got to the roosters, she saw that the male was mating a lot and asked if this was common. The guy in charge of that section said, "Dozens of times." She told him to "Please tell that to the President." When Calvin Coolidge was told about the male rooster, he asked "Same hen every time?" The attendant answered with "Oh, no, Mr. President. A different one each time." Coolidge replied by saying "Tell that to Mrs. Coolidge."

He had several White House pets, at least 25. These included several dogs, a bobcat, an antelope, lions, raccoons, a goose, and a hippo. Yeah...

He is the only American president whose birthday is July 4, the second to have been born in the state of Vermont (though, like Chester A. Arthur, who moved to New York State, he'd left for a neighboring one as a man) and the most recent to write his own speeches. Coolidge was the President who dedicated the Statue of Liberty when it was made a National Monument in 1924. He also chose which of his four predecessors would appear on Mount Rushmore: George Washington, Thomas Jefferson, Theodore Roosevelt, and Abraham Lincoln.

Referenced in the following works: