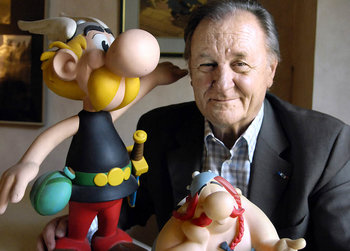 Influences:
"I looked back through history with René and reviewed all the different periods of French history. We needed something original which no-one else had worked on. When we got to the Gauls - Eureka!"
Advertisement:

The son of Italian immigrants, he is best known for co-creating perhaps the most popular French comic book character and series of all time, Asterix, with writer René Goscinny. He only drew the albums until Goscinny's death in 1977, and assumed both drawing and writing duties from 1977 to 2009.

Uderzo also co-directed two animated films based on the series along with Goscinny, the second one through a short lived animation studio they created, Studios Idéfix, which operated from 1974 to 1978. It only managed to produce two films and was shut down after Goscinny's death. He also created a theme park, the Parc Asterix, in 1989.

Uderzo retired from illustrating in the early 2010s due to growing pains in his hands, and passed the torch of helming Asterix to Jean-Yves Ferri and Didier Conrad. He passed away on March 24, 2020 from a heart attack, one month short of his 93rd birthday.

Comics he co-created or contributed to include: