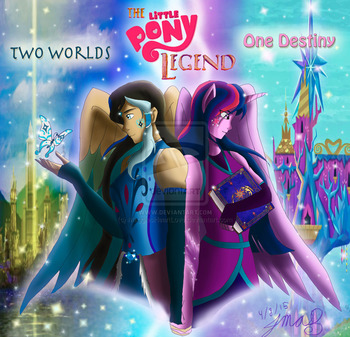 Image also by the author Maggiesheartlove

Once upon a time, in the magical land of Equestria, Princess Twilight Sparkle and her friends gave up the Elements of Harmony in order to save their home. However, after that sacrifice, they received two things. A chest with 7 locks, and a book that would not open.

Meanwhile, in another universe, Avatar Korra dreamed of having a new life away from the complex she'd lived most of her life in. Eager to get away and finish her airbending, she ran away, and made her way to Republic City.

Two universes, so different from one another, but in truth, tied together through an ancient history unknown to all but a few. When Twilight Sparkle finally managed to get the book open, she found a spell on the page that transported the elements and Spike to Korra's world. And that was just the beginning of a long history growing together fighting the forces of evil.

The Little Pony Legend combines My Little Pony: Friendship Is Magic with The Legend of Korra (and some heavy influences from the Disney Animated Canon as well, see Shout-Out for the specifics), creating a story very much similar and yet different from both worlds.

In chronological order, the fanfics are:

, an adaptation of Friendship is Magic's season 4 mixed with The Legend of Korra's characters.

: The adaptation of season 2 of Korra. (Note, the first major deviation from Korra canon happens here.)

: The adaptation of season 3 of Korra, and the season finale of season 4 of Friendship is Magic.

: An adaptation of My Little Pony: Equestria Girls – Rainbow Rocks.

: Nightmare Moon is back, and this time, she's taking over Asami.

:A Kingdom of Friendship

: Takes place during season 5 of Friendship is Magic, along with the aftermath of the NightMare's return.

: An adaptation of My Little Pony: Equestria Girls – Friendship Games.

The Little Pony Legend: The Crystalling

: All about Starlight Glimmer and her adventures with Cadence's baby.

: A brief adaptation of the Season 6 finale of Friendship is Magic.

: Balance of the Heart

: The Grand Finale of the original run, adapting season 4 of Korra.

:The Legend of Everfree

: 2.5 years after the battle with Kuvira, mirror world Twilight suspects that their magic is trapped at Camp Everfree. Hearing Twilight's call for help, Korra sends Sunset Shimmer, Starlight Glimmer and Kuvira to help. But one of them is haunted by a past she can't let go of. Can Kuvira find the courage to find a new happy ending?

: An ancient evil born from the time of Avatar Wan has grown stronger since the great change. Now, after 7 years of peace, it has returned to bring darkness to the 3 worlds again. But this time, team avatar harmony is going to have help from friends old and new, as well as the next generation.

: Eight years after the defeat of Ronin, the Elements of Harmony and the Queens of Equestria all mysteriously vanish. Now it's up to Princess Iris to find out who caused these disappearances and thwart their plans. Along the way, she's getting the help of her friends who will help her to fulfill her destiny as the next Avatar. note  This story began life as a collaboration between Maggiesheartlove and Equestria Kirin, but a dispute between the authors caused them to drop the partnership with Maggie taking back full creative control of where the story would go.

: A short spin-off based on the three Equestria Girls 30-minute specials featuring Iris, the newly-appointed Guardians of Harmony, and a reformed Chrysalis as they go about their lives after A New Beginning.

The Little Pony Legend: The Guardians of Harmony

: The (original) Grand Finale for the entire series, this story is a retelling of the My Little Pony Movie featuring Iris and the Guardians of Harmony on their journey across Equestria to Canterlot to fight the evil Storm King.

: A retelling of the A New Generation movie, also acting as a crossover with Voltron: Legendary Defender.

These fanfics contain examples of these tropes: