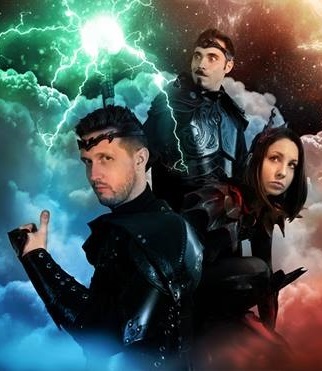 Their paths have diverged, yet keep crossing each other.
Advertisement:

Noob: Le conseil des trois factions (2015) is a feature-length sequel to the Noob webseries written and directed by Fabien Fournier. It picks up some time after the webseries left off. It is intended as both a sequel and a point of the story at which new audiences can pick it up.

In the fictional MMORPG Horizon 3.0, the Non-Player Character faction of Chaos is set to invade the world of Olydri. In addition to this, a plague is making player avatars infected with it unusable and a council is about to be organized between the leaders of the three player factions. The outcome of each of these events will partly depend on the players that choose to get involved in them.

The Noob guild as it was known in the webseries has split up. Sparadrap is now its senior member. Gaea is only a part-time member with her secondary avatar while her main avatar is now in the Coalition and about to finalize the plan for which she’s been hoarding game currency for years. Omega Zell, now part of the Justice guild, becomes a Twilight berserker and has to get used to a new avatar.

It can be viewed with English subtitles here

The movie and its two planned sequels were incidentally crowdfunded (on a European site) the same year as the Veronica Mars movie and raised close to 700 thousand euros, becoming second biggest fundraising for a feature-length work that year.

The movie is followed by Noob: La Quête Légendaire.