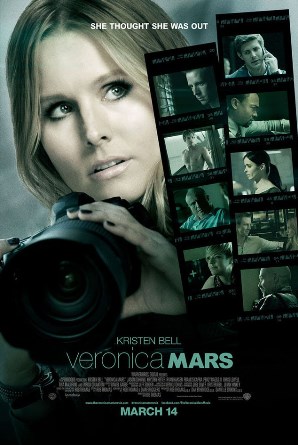 People call her a marshmallow.
Logan: I need your help, Veronica.
Veronica: I don't really do that anymore.
Advertisement:

Veronica Mars is a 2014 crime thriller and a film continuation of the television series of the same name. The film is co-written and directed by series creator Rob Thomas, and reprising their roles are Kristen Bell, Jason Dohring, Percy Daggs III, Ryan Hansen, Francis Capra, Tina Majorino, Chris Lowell, Enrico Colantoni and a number of the supporting cast.

Nine years since the series finale, Veronica has given up crime-solving, graduated from Stanford with a psychology degree, and is on the verge of finishing law school in New York with a great job opportunity. But her past in Neptune rears its ugly head when she's contacted by ex-boyfiend Logan Echolls, who's been accused of murdering his popstar girlfriend and needs Veronica's help to clear his name. The case leads Veronica back to Neptune just in time for her high school reunion, and lands her in more trouble than ever.

Plans for the Veronica Mars film were being kicked around since the series' cancellation, but they only came to fruition in March and April of 2013 when Rob Thomas and Kristen Bell launched a Kickstarter project

to help fund a feature film project. By the time the Kickstarter ended, it had raised $5.7 million and became the biggest film-related Kickstarter in the website's history. Warner Bros. signed on to distribute and market the film, and it received a simultaneous theatrical and on-demand release on March 14, 2014.

Though a sequel was never made, it was announced in August 2018 that Hulu had commissioned a fourth season of Veronica Mars to air the following year, which more or less picks up a few years later from where the movie left off.