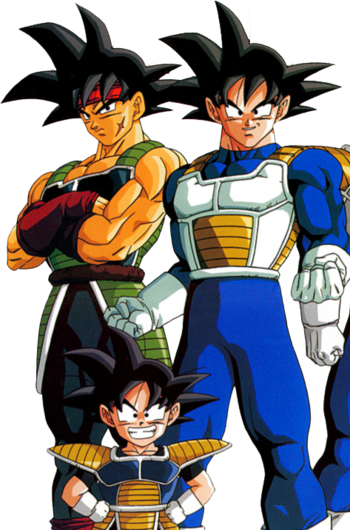 Those Saiyan genes must be pretty damn strong... to give them all the same haircut.note Clockwise from top to bottom: Bardock, Goku, and Goten.
"Hey, I think there's a little 'me' hiding behind your leg, Chi-Chi!"
— Goku, when seeing Goten for the first time, Dragon Ball Z
Advertisement:

This is an extremely common practice in animation where, to establish a familial relationship, a child looks more or less identical to one of their parents. This frequently occurs when a show uses garish or outlandish designs, where subtlety and fine physical detail are already lost, and we need a quick visual aid that other characters may not seem to notice.

If a family is the stereotypical four-member "nuclear" one, the children will usually resemble the respective same-sex parents.

If there is a Tomboy and Girly Girl or a Sensitive Guy and Manly Man, the tomboy and the manly man will usually resemble the father, while the girly girl and the sensitive guy will look like the mother.

Apart from its usage in character design, this trope can also play a role in the plot; often, someone notices how similar two characters look and thus figures out they are related to each other.

A Super-Trope of Uncanny Family Resemblance (where the similarity is maintained further along the family tree), Hereditary Hairstyle and Family Eye Resemblance. Compare Identical Grandson (where the similarities allow for reuse of a character design or actor) and Generation Xerox (where not only the appearance but also the personality and experiences are repeated). Contrast The Ugly Guy's Hot Daughter.