Film / The Many Saints of Newark 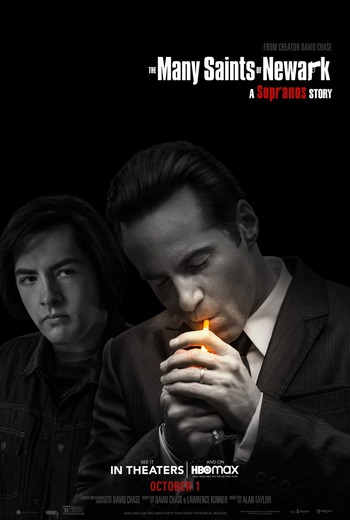 Who made Tony Soprano?
"When I was a kid, guys like me were brought up to follow codes."
— Tony Soprano
Advertisement:

The Many Saints of Newark: A Sopranos Story is a 2021 film which serves as the prequel to the HBO crime drama The Sopranos. It was released on October 1, 2021—fourteen years after the end of the original series.

Set during the run-up to the 1967 Newark race riots

, the film centers around Richard "Dickie" Moltisanti (Alessandro Nivola), a soldier in the DiMeo mafia family of New Jersey, and his young nephew Tony Soprano (Michael Gandolfini), whom he decides to take under his wing. As the DiMeo family grapples with unrest between Newark's Italian-American and black communities (and their criminal elements), Dickie increasingly pulls Tony into the violent lifestyle of the New Jersey mob.

The tropes below contain unmarked spoilers from The Sopranos. You have been warned.