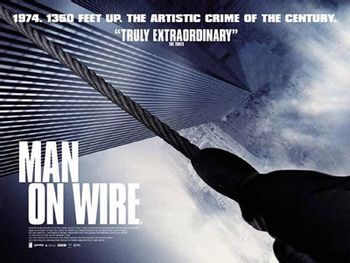 Just don't look down.
"I observed the tightrope 'dancer'—because you couldn't call him a 'walker'—approximately halfway between the two towers. And upon seeing us he started to smile and laugh and he started going into a dancing routine on the high wire... And when he got to the building we asked him to get off the high wire but instead he turned around and ran back out into the middle... He was bouncing up and down. His feet were actually leaving the wire and then he would resettle back on the wire again."
— Sgt. Daniels, Port Authority Police Department
Advertisement:

Man on Wire is a Documentary by James Marsh released in 2008. It depicts the planning and execution of the historic 1974 Twin Tower tightrope walk.

On August 7, 1974, at 7:15 a.m., French tightrope artist Philippe Petit, having hung a wire between the two towers of the World Trade Center, proceeded to walk on it—with no harness nor any form of security. For 45 minutes, while a crowd of incredulous onlookers watched, Petit walked a total of eight times from one tower to the other. He also ran, jumped, sat and lay down on the wire to watch the sky. Then he gave himself in to the police.

Using archival footage, reenactments and interviews, the film deliberately uses the narrative methods of a heist movie, since the preparations had to be conducted illegally by a small team and a great attention to detail was required.

A dramatization of the events detailed entitled The Walk directed by Robert Zemeckis and starring Joseph Gordon-Levitt as Petit was released in 2015.