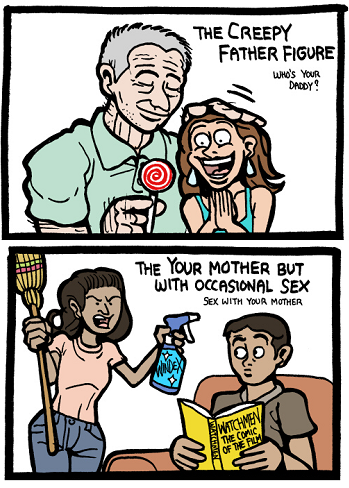 "It's trite but true that a lot of young women look for a man who reminds them of their dad. Your dad fights monsters. I fight monsters. Your dad rescued your mom from a dragon. I rescued you from Arctis Tor. Seeing the pattern here?"
— Harry Dresden to Molly Carpenter, Proven Guilty
Advertisement:

Freudian psychology has a theory that children who have a close relationship with their parents tend to look for those properties in a mate.

It happens that the first example of the male gender that a baby girl encounters is her father, and that forms her impression of maleness in general, up to and including the mate she connects with and, if she's anywhere near the Christian religion, her impression of God as "our Father in Heaven." If she has a negative father, she'll often grab up negative boyfriends as well, so it takes a certain amount of awareness to be able to break out of that tendency.

If her father is absent and an older brother (or another male father figure) is present and actively involved in her life, she bonds with him the same way and looks for men much like him.

Straight women look to their fathers as a template about what to expect and desire in a man. Sometimes if they have a really bad relationship with their father, they can go the exact other way and choose a husband opposite to their father. Either way, their father remains a very important influence in the choice of a spouse.

The same goes for straight men using their mother as a guide when choosing a wife. Lesbians and gay men are likewise influenced by their same-sex parents, and people who grew up without knowing their parents at all will likely find themselves subconsciously looking for other templates.

Some people find this squicky, but it's just as common in Real Life as in Fiction. See also Father, I Want to Marry My Brother, Dating What Daddy Hates, Parenting the Husband.