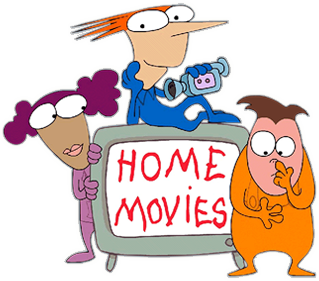 Home Movies is an Animated Sitcom that began on UPN, then moved to Adult Swim when the block premiered in 2001 (it was also the very first thing to air when the block launched). The show is a Spiritual Successor to Dr. Katz, Professional Therapist, which used the same "SquiggleVision",note At least in the first season. Subsequent seasons were done in Adobe Flash due to the fact the former style limited movement. the same "retroscripting" style of dialog, and much of the same cast.

The main character is Brendon Small, and the series was created and written by Brendon Small. As you probably already guessed, it's more or less a highly fictionalized autobiography in cartoon format. Brendon is a young aspiring filmmaker, with his cast members usually being his friends Melissa and Jason, and occasionally his mom Paula who moonlights as a creative writing teacher at a local community college (in between firings from same said college). When not at home making films, the show centers around the three kids at school and their interactions with Brendon's homeroom teacher Mr. Lynch and Brendon's soccer coach, John "The Jerk" McGuirk.

This occasionally surrealist, most other times quite hilarious, Slice of Life Sitcom originally aired on UPN during midseason 1999 and was cancelled after a limited airing. Adult Swim picked it up when said programming block was just starting, and its popularity there was enough to order a full three more seasons.

Definitely not to be confused with Home Movie.

Example of:
Stating the Simple Solution