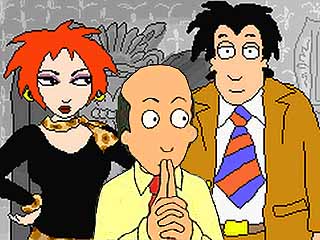 Dr. Katz, Professional Therapist is an animated series that originally ran on Comedy Central from May 28, 1995 to December 24, 1999, starring Jonathan Katz, H. Jon Benjamin, and Laura Silverman. Produced by Tom Snyder Productions (which would later become Soup2Nuts), it was the first-ever original animated cartoon series to be shown on Comedy Central, paving the way for South Park and the like.

The show was computer animated in a crude, easily recognizable style called Squiggle Vision, in which all persons and animate objects are colored and have constantly squiggling outlines, while all other inanimate objects are static and usually gray in color. The show also utilized "retroscripting", where each episode has a basic outline but the actors improvise the dialogue. This technique would also be used on the first season of Home Movies.

The show focuses on the title character, Dr. Jonathan Katz, who is voiced by, and visually based on, the comedian of the same name. Dr. Katz was a professional psychoanalyst who has famous comedians and actors as patients, usually two per episode. The comedians' therapy sessions generally consist of them doing their onstage material while Dr. Katz performs as a kind of milquetoast Straight Man. Therapy sessions featuring actors and actresses offer more interpersonal dialogue between Katz and his patient to better suit their predisposition.

Interspersed with these scenes are scenes involving Dr. Katz's daily life, which include his aimless, childish grown son, Benjamin Katz; his disinterested and unhelpful secretary, Laura; and his two friends: Stanley, and the barmaid, Julie.

South Park did a Crossover where Mr. Garrison sought therapy from Dr. Katz. Also referenced in Arthur, of all shows.

Revived in 2017 as the audio series Dr. Katz: The Audio Files, available via Audible.com.