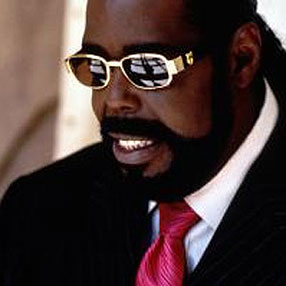 The Maestro.
"I woke up one morning, went downstairs, said 'Good morning' to my mother and nearly scared both of us to death."
—Barry White, on the day he first developed his voice
Advertisement:

Barry White (born Barry Eugene Carter, September 12, 1944 – July 4, 2003) was an American singer/songwriter, famous for his deep voice and steamy romance songs, which were probably responsible for the creation of a fair number of babies.

Growing up in South Central, Los Angeles, CA, Barry loved music from an early age, and taught himself to play piano by age 11. Barry also had a rough street life growing up, involved in gang life and being jailed for four months after stealing $30,000 worth of Cadillac tires. Allegedly, he listened to "It's Now Or Never" by Elvis Presley while in jail, and it inspired him to switch to music full time.

He did A&R for some years in the 60s on Del-Fi Records, and wound up doing songwriting and production duties for various singers. Eventually, White got the chance to mentor a girl group, and after two years of work together, they debuted as Love Unlimited on Uni Records. Their song "Walkin' in the Rain with the One I Love" was written by Barry and became a sizable hit, hitting #14 on the Billboard Hot 100. He and the girls switched over to 20th Century Records after relations with Uni began to crumble.

But you're not here for Love Unlimited; you're here for the man himself. Barry's thinking at this point was that he wanted to work with a male solo artist, but Larry Nunes, a businessman who helped finance some of his work with Love Unlimited, heard some demos Barry cut and insisted that Barry could do this himself. A humble Barry resisted, but eventually relented and released the album I've Got So Much to Give in 1973. The album contained "I'm Gonna Love You Just a Little More Baby", which hit #1 and spent much of the year in the top 40.

Barry quickly developed a reputation for his sultry bass voice and his lavish production work, though behind the scenes he was also known to be a major perfectionist. His Charmer persona on record became so provocative that women were flocking to his concerts in droves and actually mailing their house keys to the guy. The loverman image made Barry a household name, but Barry only had eyes for one woman, and that was Glodean James from Love Unlimited, who became his wife in 1974. She was actually his second wife, after he divorced his childhood sweetheart, Mary, whom he had four children with. He and Glodean would have four more.

Barry made another spin-off group called the Love Unlimited Orchestra, a 40-piece orchestral group that started out as a backing band for Love Unlimited. Things changed, and the orchestra released Barry's instrumental composition "Love's Theme," which hit #1 (this was way back when instrumentals could, in fact, be pop hits) and is often considered the Ur-Example for Disco. They only recorded albums for a decade, but were a reliable backing band for Barry through his career.

Barry would have numerous top ten hits and multiple #1s on the R&B charts. The hits slowed down as the 70s became the 80s, but Barry never really went away. He maintained a following through the years, and managed a bit of a comeback in the 1990s, scoring his first top 20 hit since 1977 with "Practice What You Preach" in 1994.

According to The Other Wiki, he was offered the role of Chef in South Park but declined as, being a devout Christian, he was uncomfortable with it. He was allegedly planning a collaboration with Marvin Gaye before Mr. Gaye's untimely death.

Also, he was apparently a fan of The Simpsons, which led to his making two guest appearances on the show.

Barry White, sometimes nicknamed "The Walrus Of Love" (a nickname he was decidedly not a fan of) was a big man, and unfortunately, it lead to a series of health problems in his advancing age, including high blood pressure and kidney problems. He suffered a stroke in 2003 while on dialysis, and passed away a little while after, on July 4th of that year. By that point, Barry had long since become a legend, leaving behind a legacy of rich, rewarding music that, more than anything else, celebrates love.

"I was just... sitting here thinking. Certain things turn me on. Like the way you might say a word, or the way you wear your hair, have a certain smile on your face... or just the way you're standing there, right now. In your baby blue panties."