My Hair Came Out Green 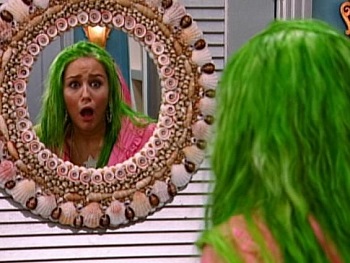 Cody: AAH! Oh no! The box said it would be a "honey-mist auburn"!
Zack: Honey, you missed auburn big time!
— The Suite Life of Zack & Cody
Advertisement:

Alice wants to dye her hair black. Or bleach it blonde. Whichever she wanted, her hair ends up a very different and thoroughly ridiculous color—usually green, though other strange hues pop up. Sometimes, the only thing to do is to shave the head and let the hair grow back.

This is a Sub-Trope of Cosmetic Catastrophe specific to hair coloring, as well as a subtrope to Bad Hair Day. Also compare Never Trust a Hair Tonic. Kaleidoscope Hair can occur if Alice keeps re-dyeing her hair. Elderly Blue-Haired Lady is a specific trope for elderly ladies whose attempt to turn ugly yellow hair a graceful grey via blue dye results in blue hair instead.

Contrast Nonconformist Dyed Hair, where hair is consciously died an unnatural color to stick it to social norms.

Asha the hairdresser tries to convince Nora not to bleach her dark Asian hair. She is proven right when it turns out a brassy orange.

Asha the hairdresser tries to convince Nora not to bleach her dark Asian hair. She is proven right when it turns out a brassy orange.