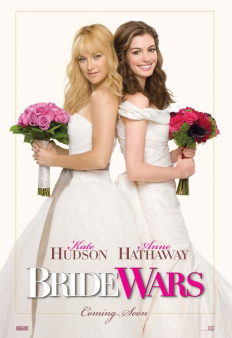 Bride Wars is a 2009 film starring Kate Hudson and Anne Hathaway. It's about two best friends, Liv (Hudson) and Emma (Hathaway) who had a lifelong dream of having a wedding in June at the Plaza Hotel. However, because of a clerical error by their wedding planner, they ended up having the exact same day. Now they are in the fight for their right to have their dream wedding and their friendship is put up to the test.

It would receive a Chinese remake in 2015.

Don't confuse it with Wedding Wars.