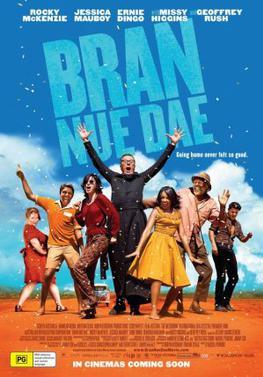 There's nothing I would rather be, than to be an Aborigine, and watch you take my precious land away. For nothing gives me greater joy than to watch you fill each girl and boy with superficial existential shit.
Advertisement:

Bran Nue Dae is a stage musical that debuted in 1990 and is about Willy (no, not like that), an Australian Aboriginal boy from Broome who attends a Catholic Aboriginal mission boarding school in the Shining City of Perth in the late 1960s. German priest Father Benedictus, the school principal, is hoping for Willy to join the priesthood as his career. However, Willy has other plans; he just wants to live and fish in Broome and spend time with his Girl Next Door Love Interest. After caught stealing from the school canteen, he runs away from school and makes his way back home, teaming up with a minor Alcoholic, Too Quirky to Lose Honorary Uncle, a hippy and her reluctantly hippy boyfriend and a bus of football players. Hilarity ensues.

As it is a musical, it has to have songs. The Australian nature of the show and the film comes across in each number, and none is a typical ‘musical theatre’ song, all having various mixes of rock, folk, country and traditional Aboriginal elements.

Was made into a film in 2009 which became one of the highest grossing Australian films, raking in $7 million.