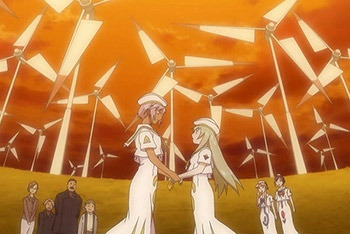 They're romantic, too.
Advertisement:

Wind turbines. When they appear they are mostly the horizontal type with three long, rotating blades, although vertical-axis, helical-bladed examples are showing up more in science fiction. They can be an expression of environmental themes, and a symbol of old technology—windmills—meeting modernity, in that they make electricity.