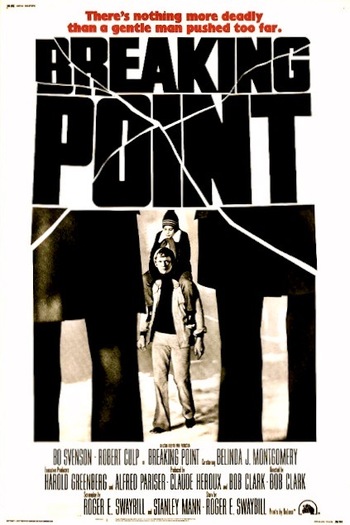 Breaking Point is a 1976 crime drama/action film written by Stanley Mann and Roger Swaybill and directed by Bob Clark.

While walking home one night, Michael McBain (Bo Svenson) witnesses the fatal being of a man by goons working for a powerful criminal organization. Michael testifies against the goons in court, sending some of them to prison. Although police detective Frank Sirrianni (Robert Culp) assures Michael that he's in no danger of reprisal, Vincent Karbone (John Colicos), a construction manager and the leader of the organization, is furious at being made to look like a fool and orders attacks on everyone connected to Michael. Michael, his sister Diana (Belinda Montgomery), his wife Helen (Linda Sorenson), and Helen's son Andy (Jeffrey Lynas) are forced to go into witness protection, but the attacks continue. Finally Michael has had enough and sets out to take down the criminals himself.