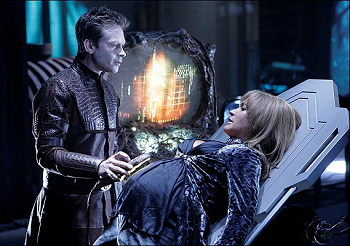 I'll get you, my pretty, and your little spawn, too!
Advertisement:

Women Are Delicate. Children Are Innocent. A pregnant woman combines these two ideas in one to create a woman whose condition rates as so vulnerable, so precious, that you never want to see anything bad happening to her.

But... what's happening? She got hurt! Worse, she's injured in a way that threatens her unborn child's life! How much more brutal can a story get?

Often used to add drama and show how ruthless the bad guys are. In most societies a pregnant woman is, for good reason, treated with courtesy and concern. She's carrying the life of another, innocent human being: protecting women like her is something we have to do, in order for our species to survive. Seeing a pregnant woman at the receiving end of violence is especially shocking for most viewers/readers.

Often turns out all right in the end, as both audiences and creators frequently find it unpalatable to play this trope through to the end.

A Super-Trope to Pregnant Hostage. Compare Traumatic C-Section and Womb Horror. May involve a Maternity Crisis if the child chooses that exact moment to come into the world, or alternatively a Convenient Miscarriage, Forced Miscarriage, or Tragic Stillbirth if child is lost as a result. Can also result in Born from a Dead Woman or Death by Childbirth if the mother dies as a result, but the child survives. Often the intersection of Would Hurt a Child and Would Hit a Girl. Overlaps with Pregnant Badass if the pregnant woman is an Action Girl who extracts herself from the peril and Baby as Payment, if the woman is trapped until she gives birth so that she is forced to uphold her end of the bargain.