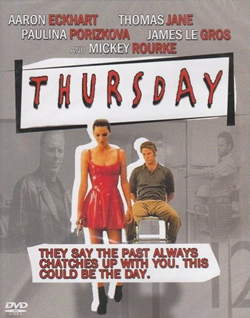 Thursday is a 1998 Black Comedy movie written and directed by Skip Woods. The film stars Thomas Jane as Casey Wells, a former Los Angeles drug dealer who decides to turn a new leaf, and start a new life for himself. So saying, Casey eventually relocates to the suburbs, with his new wife Christine (Paula Marshall), and makes a living for himself as an architect. Things seem to be going well for Casey, as he and Christine are in the process of adopting a child, however, Casey's Dark and Troubled Past comes back to haunt him, when his former partner-in-crime Nick (Aaron Eckhart) ends up dragging him in the middle of a deal that has gone bad, which includes the stunningly beautiful but completely perverted Dallas (Paulina Porizkova).

The movie marked the debut of writer/director Skip Woods, whose style of excessively violent and gory black comedy has often been compared to that of Quentin Tarantino... so much so, in fact, that many conspiracy theorists have offered the possibility that Skip Woods is actually a psuedonym for Tarantino (it also doesn't help that, at least at the time, no known photos of Woods had ever been released publically).